Sikkim at a Glance

Sikkim (27° 05' - 28° 07' North and 87° 59' - 88° 56’ East) is one of the smallest and the least populous states in India. It covers an area of 7,096 sq. km, extending approximately 114 km from North to South and 64 km from East to West. Wedged in between the Himalayan kingdoms of Nepal in the west and Bhutan in the east, Sikkim is bounded by the Darjeeling District of West Bengal in the south and a stretch of Tibetan Plateau in the north. Comprising just 0.22% of the nation’s geographical area, Sikkim harbours 33% of India’s biodiversity. There are four districts in Sikkim, namely North Sikkim, West Sikkim, South Sikkim and East Sikkim with district headquarters at Mangan, Gyalsing, Namchi and Gangtok respectively.

Sikkim is the wettest region in the entire Himalayan chain as it receives the unobstructed inflow of the southwest monsoon winds from the Bay of Bengal, which then precipitate in this region (Ali 1962). It is surrounded by (i) the Singalila mountain chain culminating in the mighty Khangchendzonga peak which at over 8,598 m is the world’s third highest point on the Earth’s surface and India’s highest peak, (ii) the Chola range and the Chumbi Valley on the Bhutan-Tibet side and (iii) the main Himalayan axis across the North. This forms a gigantic horseshoe catchment of the River Tista, the lifeline and the main river of Sikkim, and all its feeder streams, viz., Lhonak, Zemu, Lachung, Tolung, Great Rangit, Rongni and Rangpo. The Rangit and the Tista rivers form the main channels of drainage and run nearly North-South. These perennial rivers are rain-fed and snow-fed. The valleys cut by these rivers and their streams are very deep and mostly forested. 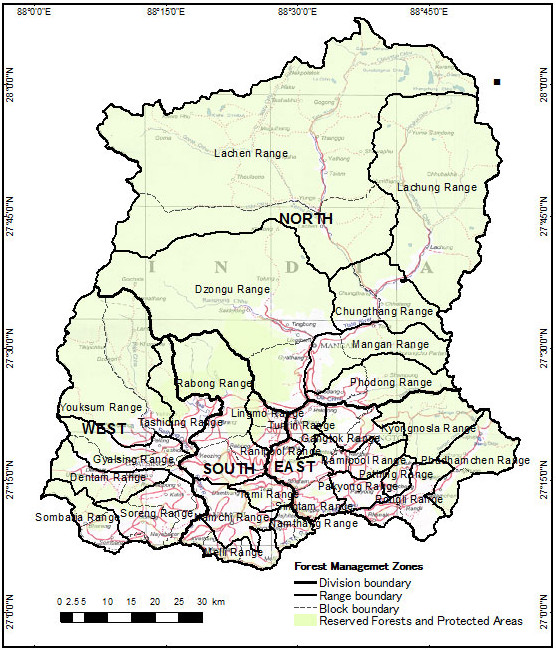